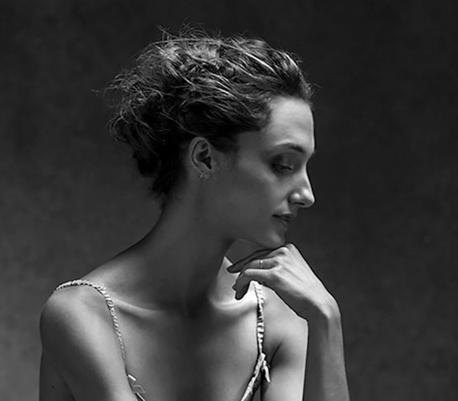 She was born in Toulouse, France, and began her studies at the National Conservatory in his hometown. Later, she entered the dance school of the Paris Opera and in 2000 she joined the Ballet as a dance teacher. She was promoted to the category of coral dancer in 2002 and in 2005, to first dancer. After her presentation in The Nutcracker, with choreography by Rudolf Nureyev, in 2007, she was named étoile (Star dancer).
Her awards include the Prix du public de l'AROP in 2002, Cercle Carpeaux 2004, Ballet 2000 (Cannes), Léonide Massine (Positano, Italy) 2006 and Chevalier des arts et des lettres in 2014. In 2017 she starred in the internationally acclaimed and award-winning short film Naissance d'une étoile directed by James Bort.
Her extensive repertoire includes roles as Nykia and Gamzatti in La Bayadera, Odette/Odile in Swan Lake, Cendrillon in Cendrillon, Kitri in Don Quixote, Clara in The Nutcracker, Raymonda in Raymonda, Juliet in Romeo and Juliet (Nureyev), Tatiana in Onegin (John Cranko), Giselle in Giselle (Coralli et Perrot), Lise in La Fille mal Gardée (Frederik Ashton), as well as works by George Balanchine, William Forsythe, Jiří Kylian, Benjamin Millepied, John Neumeier, Marius Petipa, Roland Petit and Jerome Robbins, to mention a few.
Choreographers such as José Martínez, Edouard Lock, Trisha Brown, Manuel Legris, Wayne McGregor and John Neumeier have created ro-les for her.
Throughout her career, she has also participated in numerous international ballet galas and tours in the United States, Brazil, Russia, Japan, Australia, Cuba and China.