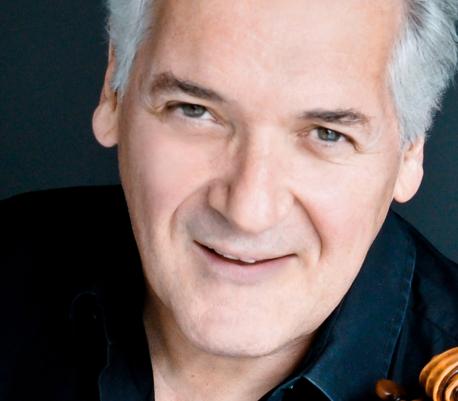 Born in Tel Aviv in 1948, he began his studies with Ilona Feher. With the support of Isaac Stern and Pau Casals, he arrived in the United States in 1962 to study with Ivan Galamian at the Juilliard School on a scholarship. In 1967 he won the Leventritt Competition, after which he began his career as a soloist. Recognized as a musical phenomenon for more than four decades, his musical genius, prodigious technique and artistic quality continue to amaze audiences.
He is equally respected as a violinist, violist, conductor, educator and chamber musician. He was awarded the Medal of Arts and the Isaac Stern Prize for artistic excellence. A passionate teacher, he developed innovative programs in London, New York, China, Israel and Ottawa. He chairs the Pinchas Zukerman Performance Program at the Manhattan School of Music, a pioneer in the use of technology in distance education.
In Canada, where he was Music Director of the National Centre for the Arts Orchestra (1999-2015), he founded the NAC Institute for Orchestral Studies and the Summer Music Institute, which includes programs for young artists, conductors and composers. He is currently Emeritus Conductor of the National Center for the Arts Orchestra and Artistic Director of its Young Artists Program. His extensive discography contains more than 100 titles, has won 21 nominations and two Grammy awards. His complete recordings were released in 2016 in a collection of 22 albums, which include baroque, classical and romantic concerts, and chamber music.
This season, his 8th as Principal Guest Conductor of the Royal Philharmonic Orchestra in London and 2nd as Associate Artist of the Adelaide Symphony (Australia), includes over 100 concerts worldwide. As a conductor and soloist he will perform with the Cleveland and Boston Orchestras, the Pittsburgh, Montreal and Sydney Symphonies, the Berlin, Israel and Tokyo Philharmonics, among others; he will give recitals in Europe with Yefim Bronfman and concerts with the Zukerman Trio.